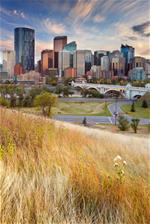 As Alberta’s largest city, Calgary features a metropolitan population of over 1.2 million, making it one of the largest cities in Canada, and the third-largest municipality in the country.

Calgary has been host to many prominent global presences, including being the first Canadian city to ever host the Olympic Winter Games in 1988.

The rich and at times tumultuous history of Calgary over time has given rise to a modern region that proudly features a highly diverse industry and culture.

Calgary residents enjoy a generally mild range of climate year-round, with temperatures ranging roughly from 24 °C (75 °F) in late July to −3 °C (27 °F) in mid-January. Calgary has the highest ratio of sunny days per year of any of Canada’s largest 100 cities, with a substantial 332 days per year of sunshine!

At North American Van Lines, we are dedicated to providing a superior local, long distance or international move that is uniquely assembled to meet your exact needs—no matter who or what you are moving –yourself, your family, employees or business, you can find the best Calgary movers with a fully customized plan to suit your needs. You can fill out our quick quote form for your free moving estimate right now.

An international relocation will be handled by long distance movers with offices and representatives in more than 140 countries all over the world. Regardless of whether you’re coming to or from Calgary, our “North American Way” will provide the highest quality move possible, every step of the way.

Top Places to Move to from Alberta