Moving from Ontario to British Columbia: Benefits, Cost & How To

Whether you are looking for a new career, education, or a change of scenery, there are many reasons to relocate to British Columbia. Moving to a new area may be an exciting and novel experience for everyone, regardless of their current situation. On the other hand, moving may be nerve-wracking at times. For many people, relocating to a new province may make them feel apprehensive.

It would help if you found out as much as possible about where you are moving to. The last thing you want is to start regretting your choice once you've already followed through with it. This guide contains all the information you need to make moving from Ontario to British Columbia as smooth as possible. 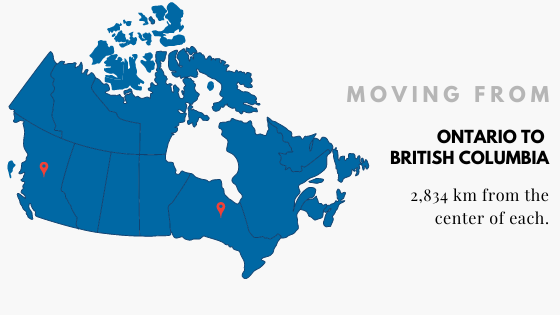 Benefits of moving from Ontario to British Columbia

The province of British Columbia has more protected land than any other province in Canada. 141 ecological reserves, 35 marine parks, and 13 cultural sites are spread over seven of Canada's National Parks. It is the most mountainous province in the country, and it's gorgeous mountain ranges are its most prominent feature. It contains a temperate rainforest across 27,000 kilometers of its coastline, while alpine tundra, ice fields and glaciers dominate the far northern areas. Besides its natural beauty, British Columbia has a lot to offer prospective residents. The following is an overview of what to expect once you move:

The cost of living varies widely depending on where you go and how large a city or small hamlet you wish to be in your new location. According to the data, these two Canadian provinces don't seem to be that distinct. In December 2019, a one-bedroom apartment in Vancouver averaged $1,967 per month (source: rentals.ca), while a two-bedroom went for $3,058. For a one-bedroom apartment in Toronto, Ontario, the rent is $2,314, while for a two-bedroom, it is $2,966. To keep the same quality of life in Vancouver, you would need $6,524.38 in net earnings after income tax compared to $6,700 in Toronto. The bulk of the province's residents live in Toronto, so going to the Vancouver region should be around the same in terms of cost, but costs decrease if you go outside of Toronto.

There are many ways to travel

The beautiful province of British Columbia is well-served by various other forms of transportation. There is a wide range of public transportation options in British Columbia, and the public bus system serves almost every part of the province. Taxis are also regarded as a speedy and convenient mode of transportation, and several taxi firms are operating in and around major cities. Traveling by boat is an excellent opportunity to see the ocean from a new perspective, and it's also a fun way to go to some of the most beautiful islands in the world.

The economy and job market

It's no surprise that British Columbia is becoming a significant player in the global economy. B.C.'s economy has increased because Vancouver's biggest port handles $200 million worth of goods every day. Second, only to Alberta, Ontario's real GDP has expanded by 2.5 percent, compared to Ontario's 1.6 percent growth rate.

Besides biotechnology, alternative energies, and software development, Vancouver is home to some of the world's most important industries. HSBC Canada's headquarters are also located in Vancouver. Thanks to these large corporations, thousands of people in British Columbia now have work. According to reports, there were 46,500 new jobs in British Columbia between June 2018 and April 2019. Despite low unemployment, additional jobs are projected to be created.

The outdoors has a lot to offer

The stunning environment of British Columbia makes it one of the most significant locations in the world to live, with summer activities like sailing and golf and winter activities like skiing and ice climbing. With its snow-covered peaks and world-class slopes, Whistler-Blackcomb is a top destination for avid skiers and snowboarders looking to settle in British Columbia.

Glacier National Park is one of Canada's most ecologically important places, home to old cedar trees, bears, caribou, and a stunning landscape that is ideal for rock climbing and trekking. Ainsworth Hot Springs in the province's southwest is a popular destination for those seeking a more laid-back atmosphere and intimate experiences with nature.

Because this province's forests comprise two-thirds of its territory and most of it has seen little human activity, it's essential to practice safety while venturing into the wild. Cycling, hiking, camping, and rock climbing are just some of the various outdoor activities available when the weather is pleasant. Different snow-related sports are popular among locals and tourists alike throughout the winter months.

It's common knowledge that tourists flock to British Columbia for its breathtaking landscape and stay for the cuisine, wine, and peaceful atmosphere. The province has become a significant destination for food and dining fans due to the availability of farms, vineyards, breweries, and restaurants that collaborate with award-winning chefs.

Many restaurants in British Columbia use fresh, locally sourced products wherever possible, and there is a wide range of cuisines to choose from. There are many ways to relax in British Columbia, such as bathing in the natural hot springs or visiting one of the many wellness facilities you can find around the state.

Many British Columbians are immigrants, accounting for roughly a quarter of the province's total population. Indigenous Aboriginal peoples make up an extra 5% of the population. Language diversity in British Columbia includes English and French and other indigenous languages, such as the Punjabi and Korean dialects of India.

As with the rest of the nation, the people of British Columbia welcome visitors of all ethnicities and religious affiliations. Canada is their home, producing a lively and multicultural atmosphere that attracts students worldwide.

Cost of moving from Ontario to British Columbia

Expenses for relocating vary widely depending on where you're going and where you're leaving from. How much it costs to move depends on how much stuff you're moving and how far it's going to take you. Since the journey from Ontario to British Columbia is around 3,700 kilometers, the cost of moving will be high regardless of which firm is employed. To get an idea of how much it will cost, fill out a quotation form.

How to move from Ontario to British Columbia

If you're moving from Ontario to British Columbia, you'll have to contend with the long drive between the two provinces. North American Van Lines offers a variety of services, including packing and unloading, assembly and disassembly, storage, and custom crating. You have complete control over the moving process, and you can design your customized moving strategy to meet your specific requirements. Specialty or delicate products are also not a concern. If you want to carry these valuables, their movers are educated in the art of skilled packing. North American Van Lines offers a range of services to suit your needs, from full-service to simple, to ensure your relocation goes as smoothly as possible.

Since 1933, North American Van Lines has been a household name in the moving business. Over 500 agent locations throughout North America will ensure that you can get a mover whenever and wherever you need one. Corporate relocation, long-distance moves, and local residential moves are all areas of expertise for this company.

If you are moving across town or the world, your possessions will be packed, loaded, and transported by one of their professional agents. They realize that there's more to the shift than just the physical one. Please read some of their reviews and get a quotation if our over 80-year-old reputation doesn't interest you.